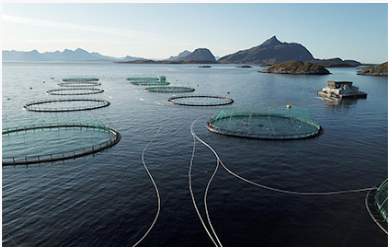 Over 150,000 euros saved per salmon generation

Wittenberg, 12 November 2019 The Norwegian fish farming company Kvarøy is using a Tesvolt bulk storage tank on its salmon farm off the island of Selsøyvær in the North Sea. On the floating work platform, the lithium batteries with a total storage capacity of 158 kilowatt hours (kW) reduce the operating time of the diesel generators from 24 to only three hours a day. When rearing a generation of salmon, which takes about 18 months, the company thus saves between 150,000 and 200,000 euros and reduces CO2 emissions. The battery system was developed, supplied and installed by the German commercial storage manufacturer Tesvolt together with its Norwegian partner company Kverneland Energi to meet the individual requirements on the fish farm.

Kvarøy, a family business in its third generation, is committed to sustainable fish farming. The high diesel consumption in the operation of the fish farm and the feeding systems is an important factor. Two large and one small diesel generator are in operation on the anchored concrete platform. At least one has to run constantly, as there is no electricity on board. At the same time, the power requirements fluctuate greatly over the course of a day: At feeding times, the systems require a lot of energy, at other times only the lights on the 20 by 20 meter large, driveless ship are on. Due to the long running times and the poor combustion of the diesel in the generators, every kilowatt hour of electricity was associated with considerable costs. In addition, a large proportion of the diesel only kept the engine warm, while a small proportion was used to power the plant. In addition, the fuel has to be transported to the salmon farm by boat, which requires additional energy and causes costs.

"Tesvolt battery storage systems are the only ones on the market that can be fully charged and discharged twice a day and still have a long service life," says Jonas A Kverneland, technical manager of Kverneland Energi, describing the results of his market research. "Many suppliers only allow one load and unload per day, which would not have worked for the salmon farm."

Oil changes twice a year instead of monthly

The cost savings are also helped by the fact that the Kvarøy team no longer needs to change the oil for the diesel generators every month, but only twice a year. An oil change takes one day and costs up to 1,000 euros. This means that the company now saves ten working days and 10,000 euros per year on oil changes.

"The sharp drop in diesel consumption is a contribution to climate protection and to keeping water bodies as clean as possible," says Jonas A Kverneland. This is also a major concern for the Norwegian government. His customer in turn is pleased: "We bought the battery, installed it and forgot about it. It runs by itself and is completely maintenance-free," says Gjermund Olsen, one of Kvarøy's managing directors.

His employees, who on average come to the platform once a week for maintenance work, have no additional work whatsoever due to the new energy system. On the contrary, they benefit from more pleasant working conditions. The fact that the diesel generators run only rarely means that there is less noise, exhaust fumes and vibration on the fish farm.